Mike and I had an awesome trip to Colorado from August 29th – September 8th…yes, a nice, long vacation! We went to visit his best friend, Grant, who lives in Colorado Springs – it was so great getting to know Grant better and fun to see the best buds reunited and living it up. The trip was filled with some good relaxation, peaceful morning runs and, though I did spend a good chunk of time on work stuff, it felt good to be in a different environment (surrounded by beautiful mountains!). The downtime was countered with some fun adventures and memories that I’m sure we’ll hold on to for a long time. 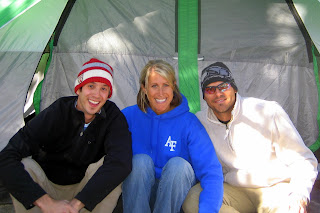 THANK YOU, GRANT, FOR TAKING YOUR WEEK TO SHOW US GOD’S BACKYARD – YOU ARE A SUPER HOST AND TOUR GUIDE! 🙂

Here’s a little rundown of our week!
FRIDAY: Drove to Chicago and flew to Colorado – had a Labor Day grill-out at Grant’s place and got to meet a bunch of his lovely and crazy fun friends. 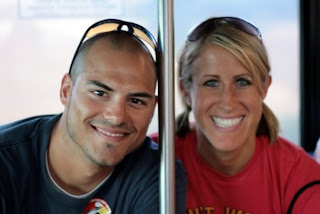 SATURDAY: After a trip to the grocery store to stock up for the week, a bunch of us put on our country-best and headed to the Colorado State Fair. Yee-Haw! We spent most of the afternoon at the Monster Truck Rally, where “Sudden Impact” and “Martial Law” clearly dominated. 🙂 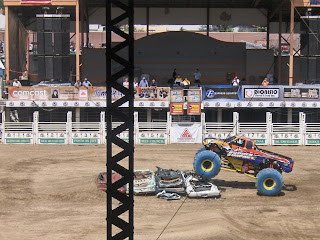 Another highlight was the Mutton Bustin’ competition – this was hilarious! Children would gear up and ride sheep and zoom across the corral to the end or until they fell. All of them fell. The sight of these little kids riding the sheep (who were FAST!) cracked me up! 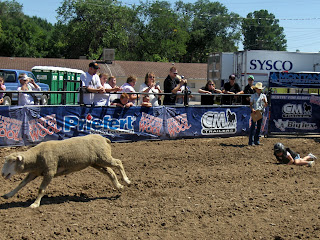 Notice the little girl tossed into the dirt after trying to ride the sheep out of the gate…. 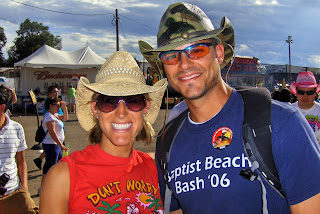 SUNDAY: Church in the morning, then I caught up on some worky work at a local coffee shop while Mike and Grant had a Man Hike. 🙂 We drove through Garden of the Gods on the way home and took some quick postcard-worthy pics. Dinner at Grant’s friend, Denise’s house, was fantastic. It was Denise’s birthday – this would be one of two birthday parties that week of people I didn’t know…Yea – Gotta love free meals! 🙂 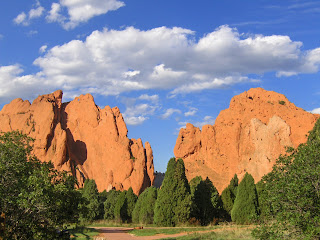 MONDAY: Rockclimbing! We were fortunate to have two climbers, Grant and Ryan, who are expert enough to lead us on some pretty beautiful climbs at Red Rock Canyon. This was my first time actually climbing a real rock wall (not man-made)…the challenge was…really challenging, but thrilling and heart-pumping – and so fun! The weather was abosolutely perfect and taking in all the sights (especially the view once you made it to the top) was breathtaking! (either that, or I was experiencing the extreme oxygen deprivation…that could be it, too) 😉 Dinnertime was spent in Manitou Springs – it was neat to see ‘Old Colorado City’ and the eccleticness of this part of town. 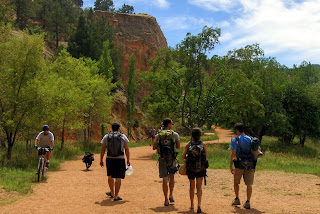 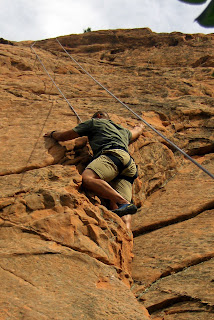 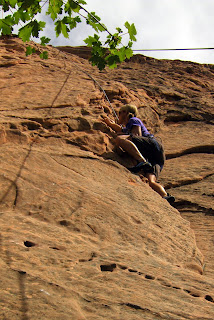 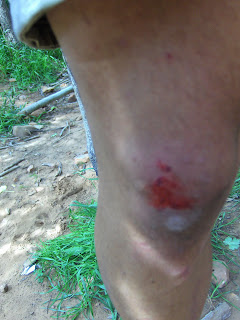 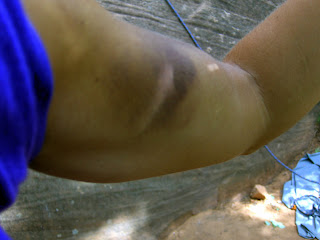 Battle wounds from rockclimbing and skydiving the week earlier – we’ve had some adventures lately!~

TUESDAY: Grant headed to work (oh yea, someone had to, I guess :)) so Mike and I had the day to do touristy stuff around Colorado Springs. We took a guided tour through Focus on the Family, where Grant and a bunch of his friends work – this was really neat to see. The campus is huge, and the ministry and heart of the company is even huger. We then headed to the Air Force Academy and took a self-guided tour (…I thought the security would be a lot tighter!). A highlight here was the Cadet Chapel – built in the 1950s, this building was so modern, it could have been built this year and would STILL look ahead of its time. Each room within the chapel was filled with extravegance and symbolism reminiscent of both the Air Force and religious history – it was gorgeous! The evening was complete with another grill-out/birthday party and spending time with new friends. 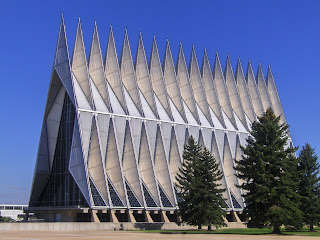 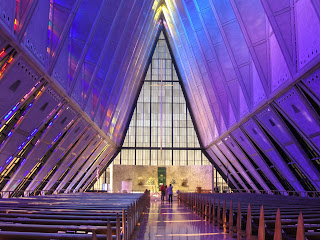 WEDNESDAY: Another tour day with just me and my Michael – we spent the later part of the morning at the U.S. Olympic Training Center. The center is essentially a campus that houses a hundred or so resident athletes and numerous other part-time/visiting athletes. The environment and training schedule seemed intense – it was so honoring to be on the grounds and in the same facilities as so many phenominal athletes. Seeing the gymnasium, weight room (my favorite part), pool (where Michael Phelps trained! The pool was drained…it only happens every 4-yrs, so pretty cool that we got to see it that way!), athletic training room, exercise physiology labs (another favorite) and all the memoriabilia was really moving, especially as we basked in the afterglow of this year’s Olympics! 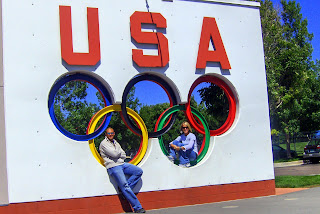 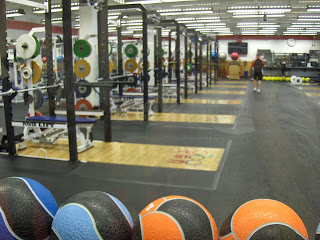 See, even Olympic athletes use Med Balls!! I wonder if they warm-up with the Chopper… 🙂 🙂

We then headed up Pikes Peak, a 14, 110 ft mountain in the springs. Grant let us borrow his car, so I got to drive and Michael got to look over the edge the entire time (did I tell you he hates heights?! haha, sorry Mike). We made it to the Summit, celebrated with some snackins, took some pics, then headed back down. Mike took over the gear changing so I wouldn’t burn out the brakes – that descent was intense! 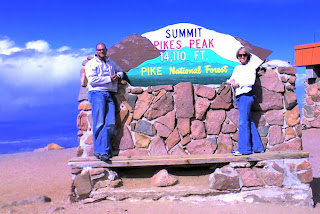 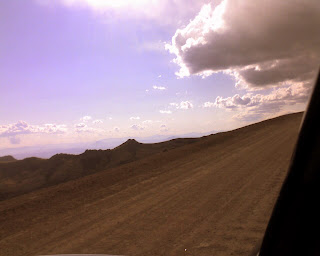 The view on the mountain road!

THURSDAY: This was a do-nothing kind of day. Relaxed, chilled, spent time with Grant and his brother and sister-in-law playing Cranium. Oh, by the way…ask Mike to do his shockingly-good Julia Childs impression for ya…. 🙂 ha!

FRIDAY: After finding our way to Golden, CO to taste the cold Rocky Mt. Spring water (mmmm…) with a tour of the Coors Brewing Co. (very cool, by the way – who knew brewing beer could be so interesting?!), we drove up to Boulder and walked around the university. We had a fun night out in Denver and were shown all the hot-spots downtown – my favorite was Cowboy Lounge – an urban honkey-tonk in all its glory. So fun! 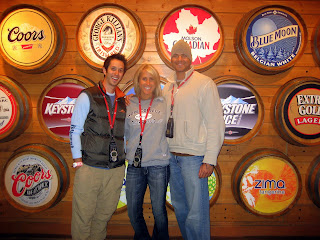 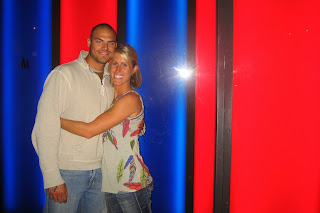 Let me not forget our dinner at Casa Bonita (recommended by many, including my Aunt Kathy – well, Mike didn’t forget about that and insisted we go!)- a huge Mexican restaurant that seats 1,100 people. Yes, that’s right. It’s actually more of an amusement park – little theater acts, people diving into waterfalls, a gorilla-suit man, mariachi band, old-time photo booth, haunted caves, cotton candy stands…it was so bizarre! It was definitely an EXPERIENCE – and I dare you to get the theme song outta your head once you hear it…Casa Boniiiittt-a! Casa Boniiiitta-a!…oh dear. 🙂 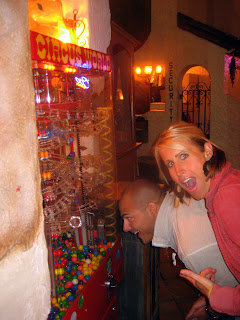 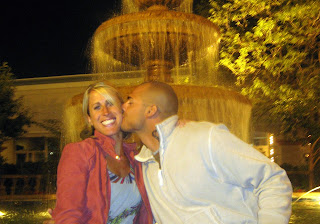 SATURDAY: Road trip! We packed up the camping gear and headed to Rocky Mt. Nat’l Park – opting to take the ‘long way’ through the back of the park, which took a good 3-4 hrs. Our first stop, though, was Red Rock Park & Ampitheater – I’ve seen pictures and couldn’t wait to see it in person. It was so beautiful and I’d love to someday go to a concert in the outdoor ampitheater…I bet it’s amazing. We also met a guy, Travis, while we were visiting, who just got out of the Marines and took the summer to ride his bike from NYC to LA…then to Candada…Wyoming…Colorado…and beyond! This guy was so inspirational and I wish him the best on his journey! Mike had a good time ‘talkin’ bikes’ with him. Notice the stairs behind us – there were a ton of people running them for their morning workout. I kinda wanted to join ’em…gave me some good ideas for my valeo workouts, though…(look out!) 😉 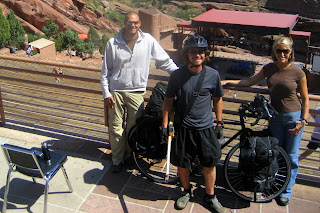 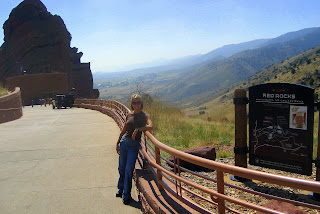 Once we got in Rocky Mt. Nat’l Park, the views were some of the most magestic I’ve ever seen – we stopped numerous times along the way for some elk and mountain pics – though the 40+mph winds and coooold temps made us pretty content to do most of the viewing through the car window. We met up with Grant’s brother and some buddies and took a seemingly-endless hike (VERY beautiful none-the-less) up the Lily Mt. Trail before heading to our campsite. The night was filled with laughter and converstation over the campfire about ‘the good-‘ol days’ in Lafayette for Grant and Mike – it was fun to be taken back and hear about some of their shinanagens back in high school…:) 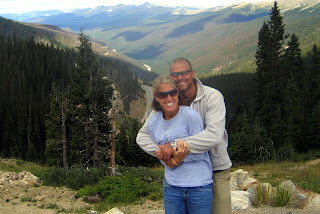 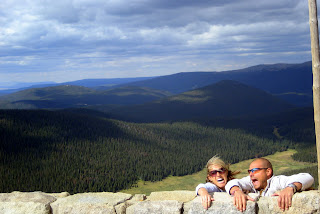 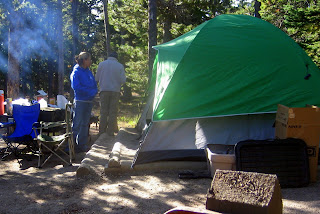 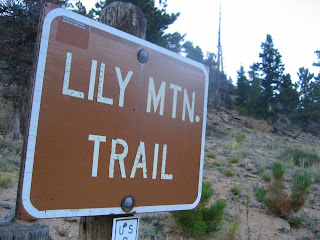 SUNDAY –> MONDAY: After a yummy breakfast over the fire, we packed up camp and headed back to Colorado Springs, taking a pit-stop at Estes Park for the afternoon. Back in Colorado Springs, Mike and Grant had one last guy-time together before we all crashed…then headed out early Monday morning for home. 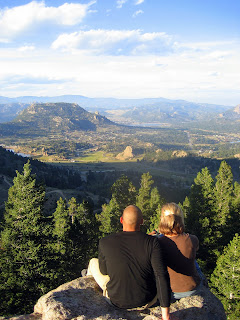 It was such a fun trip that we’ll never forget!!